What kind of country do you want to leave your children?

So, I realize older people aren't exactly the demographic that goes around reading blogs, but maybe there are parents and grandparents reading my blog that identify with McCain.

I like McCain. I voted for Bush the first time. I know plenty of people who vote Republican every election without fail. I too like traditional Republican values... lower taxes, smaller government, less regulation, free trade, and I even support Bush when it comes to immigration, but I didn't vote for Bush a second time, and I won't be giving McCain my vote either.

To the older people who know me, I wish you, too, would please not give your vote blindly to McCain. Why? Look at what the Republican party has done with control over Congress and the Executive Branch for a majority of the past eight years... our civil liberties are almost gone. We are all treated like potential terrorists in airports. We are treated like potential terrorists on our phone calls. If we happen to disagree with what the government is doing we are called unpatriotic. If we happen to want to retain rights we've had for years for an individual to make her own decision about her own body, Palin thinks the federal government should make that choice for you. In fact, if the Republicans really liked less regulation, they would stop wasting time trying to regulate who can and cannot marry and who can and cannot join the military and instead focus on national defense, taxes, spending, regulation of commerce, coining our money, and promoting progress in arts and sciences and whatever else happens to be in article 1 section 8 of the constitution.

If you'll indulge me for a moment, I wanted to share a few quotes:

"He has made Judges dependent on his Will alone for the tenure of their offices, and the amount and payment of their salaries."

"For depriving us in many cases, of the benefit of Trial by Jury:"

"For transporting us beyond Seas to be tried for pretended offences"

"In every stage of these Oppressions We have Petitioned for Redress in the most humble terms: Our repeated Petitions have been answered only by repeated injury."

The above quotes come from the Declaration of Independence, not from a "liberal" article about George Bush, yet somehow they seem oddly timely.

President Bush is a guy I'd love to have a hot dog with. McCain is also that type of guy. Obama seems like someone someone could actually have an intelligent discussion with... maybe over a nice chicago deep dish pizza. I think if the trillions of dollars the current administration has spent delivering us to our nation's current standing in the world have taught us anything, it's that it's time to put the smartest man for the job in the White House, not the man that you'd rather have a hot dog with.

So please, we need change. Don't blindly vote for McCain. Don't let the nation fall further into crisis by leaving the same people in charge that got us into this mess. You owe it to your children and grandchildren and any future great grandchildren not to re-elect anyone who put us into this mess to give the other party a chance to get us out. Give the Democrats four years. If they can't fix things by then, try another party... Libertarians maybe? Right now we need anything but four more years of Bush's current supporters behind the curtains pulling the strings. - nil

Donuts and Bacon: Taste we can Believe in - blue T-shirt 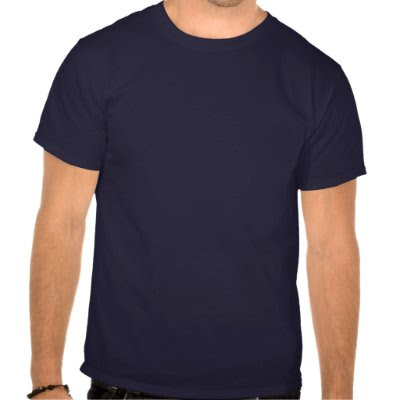