Wriststrong Bracelet and the Environment 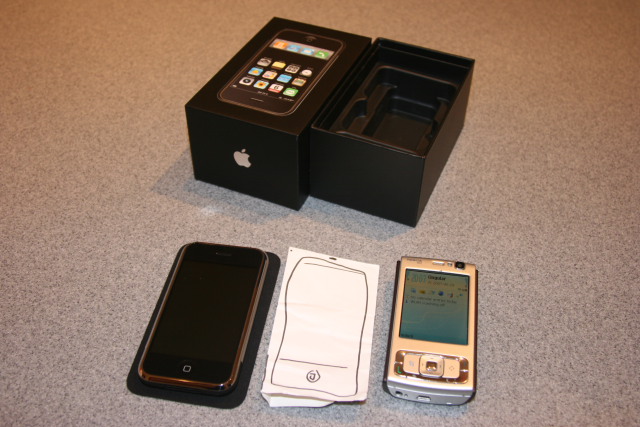 I arrived at the AT&T store in Mountain View to find about 15-20 people in line, so I thought I'd check out the Apple store at Valley Fair mall that Woz was supposed to be waiting in line at... It had hundreds of people waiting, so I left to check out the AT&T store in San Jose. I was probably number 54 in line when I arrived sometime between 3pm and 4pm. As it turned out, I was the last person to walk out of the store with an iPhone, and had I gotten there 8 people earlier -- which would have been possible had I not made the other two stops to check out the situation at the other locations, I would have even got my first choice model. I suspect most of the 4GB models that Apple sold were sold after stores ran out of the 8GB models.

Anyway, this is the first side-by-side comparison that I know of of these two phones, so I thought I'd share it and the story of the "drama" of getting an iPhone that fortunately only lasted about four hours total for me. Apple could have sold at least 100 more opening day had they shipped enough product to the AT&T store nearest their headquarters. At least one Apple employee was observed criticizing the entire operation at the AT&T store, giving the manager a hard time.

Update: At 4PM Saturday, it was possible to walk into the Apple store at Valley Fair mall in Santa Clara and walk out with a 4GB iPhone at 4:04PM. The iPhone launch is clearly not another Wii launch.
Posted by Nathan at 6/29/2007 09:06:00 PM No comments:

And then after a long silence, there was more change... on 11 September 2006, I accepted a position at Google... after a quarter working at Google, I've still not made it to all of the cafes, but the least-often-mentioned benefit is that I finally work somewhere that requires no explanation to non-technical friends and family.
Posted by Nathan at 2/17/2007 12:07:00 AM No comments: